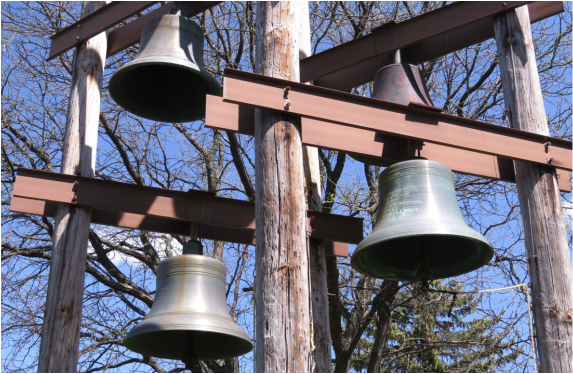 ​In the early 1960's the Town of Camillus was growing rapidly, as was the congregation of The First Methodist Church in the Village of Camillus. The  two Sunday services were overflowing and there was inadequate room for all the Sunday school children. There was no room at the site to expand the 100-year-old building. Several options were considered, including moving to a larger location or splitting into separate congregations. It was decided to split.

On October 23, 1966, District Superintendent Rev.  Dr.  Donald Wright and Bishop Ralph Ward met with the congregation and a new church, Immanuel United Methodist Church, “Church of the Bells” was formed. Rev.  “Eli” Whitney was its first pastor. (The “United” was added in April 1968 with the merger of the Methodist Church and the Evangelical United Brethren Church.)

The present site on Kasson Road was purchased. On August 26, 1967, Bishop Ward presided at the ground breaking ceremony for construction of the Sunday school wing including the Fireside Room. The first worship service was held in what is now Fellowship Hall, on May 19, 1968, and the church was consecrated two weeks later.

The congregation continued to meet in Fellowship Hall and to prosper. On May 19, 1988 a mortgage burning ceremony was held. Once again more space was needed and plans were started to build a “real” sanctuary. In 1993 a building committee was formed and a design selected. After a successful fund drive in the spring of 1995, construction of the sanctuary, nursery and new offices was begun. On July 30, 1995, District Superintendent Robert Stoppert and Pastor Wendy Rhodehamel officiated at the ground breaking ceremony. Construction was completed in time for Christmas Eve on December 24, 1995. The Consecration celebration with Bishop Hae-Jong Kim was January 7, 1996.

Building the new sanctuary spurred a growth spurt in the church’s membership and worship attendance that continues to this day. By the grace of God, Immanuel has become one of the most active churches on the western edge of Syracuse and one of the leading United Methodist churches in the region-not because of its size alone, but for the spirit, vision, generosity and compassion of its members. Now, well into the 21st century, Immanuel will soon celebrate its 55th birthday. The church is poised for exciting new ventures in youth and family life, interracial and interfaith partnerships, creative worship, and outreach stretching from Camillus to Syracuse to the other side of the world.

Story of the Bells 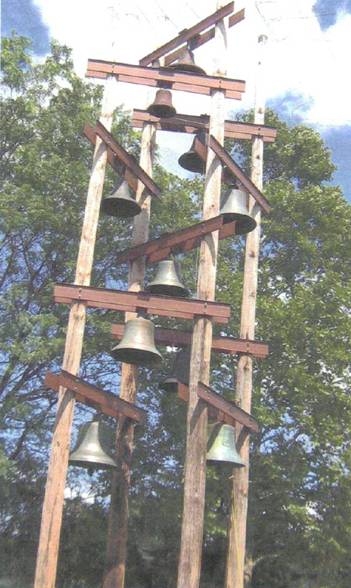 The bell that once graced the roof over the entrance to the church, and rung by MANY enthusiastic children through the years, was a gift of the Royce Newell family in June 1967. It came from Venice Center and weighed about 200 lbs.

The next two bells were also obtained in June 1967. One came from Morgan Road Methodist Church and another from South Columbia Methodist Church. They each weighed approximately 1500 lbs. and were of steel alloy.

In May 1973 a bell was obtained from the First M.E. Church in Pulaski. It was purchased by their congregation in 1884. The tenth bell was from St. Andrews Episcopal Church at Deys Landing. Then, in the spring of 1977 the last bell was acquired from Wiscoy Methodist Church in Portageville through the efforts of Rev. Dean Richardson.

All of the bells were obtained through the inspiration and tremendous dedication of Rev. L.B. (Eli) Whitney and especially of Royce, Caroline, William and Julie Newell. Many hilarious tales were told of their experiences with the rickety bell tower ladders, cobwebs and cupolas inhabited for years by pigeons. Recognition must also be given for help by Mike Tambroni with his wrecker, Floyd House for being a willing helper, Earl Hudson for lending special equipment and the use of Harlan Hudson’s barn to store the bells until we had a Bell Tower, and Robert Scudder for obtaining, through the telephone company, all of the supporting poles for the tower.
​

Story of the Stained Glass Window 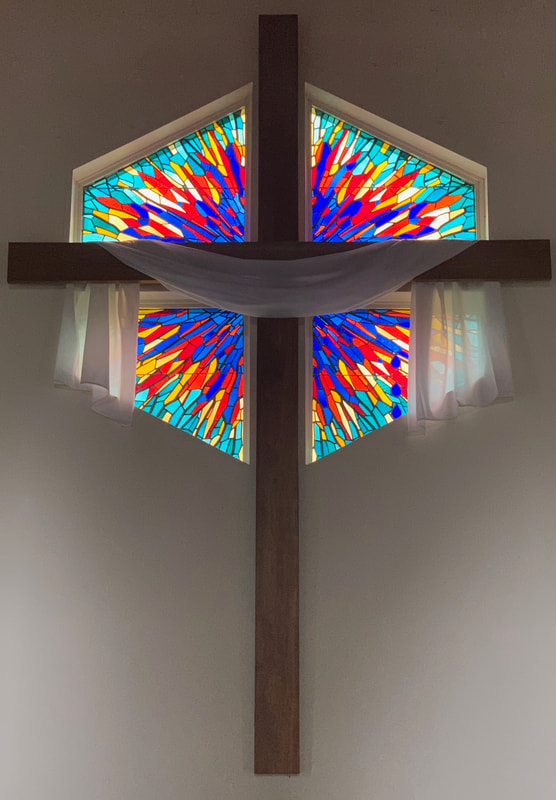 As United Methodists, we are invited to develop a personal relationship with God. The design of the front sanctuary window is intentionally abstract because what we see in this window, is what we “see” in our faith, and is determined through our own personal insights and inspirations.

Our focus as we look forward is always the cross. The cross is clearly the most important part of the window and is the center from which the entire design radiates – reminding us that only through a Christ centered life can we achieve balance, order, and purpose.

Notice that each piece of glass is different and distinct, yet no one piece is more important than any other. By itself, the shape of each piece has no meaning. But together, there is direction and unity.

The blue, red and the gold symbolize the suffering, passion, and the glory of Christ’s life.

The red also reminds us of the blood that Christ shed. The tears remind us that he wept. The tears are blue because blue symbolizes hope – Christ is our hope and salvation.

The dark colors are in the center of the design - reminding us that our faith takes us out of the darkness into the light. The darkness of the center radiating into a sunburst of yellow and orange represents the despair of the crucifixion transforming into the joy and light of the resurrection.

The blue in the middle is reminiscent of water. Jesus said he will become a spring of water welling up to eternal life. The red, yellow, and orange are reminiscent of fire and the flame of the Holy Spirit. The green on the outside symbolizes growth and renewal. Baptism by water, and hearts warmed by the touch of the Holy Spirit lead to the spiritual growth and renewal of each of us here in the congregation.

We can each see many things in the colors, the shapes and design of the window. You might see fish swimming together; you might see the opening of the tomb, or you may only see an abstract design. A design with a definite outward direction – just as our faith starts with Christ and then our witness and our mission spread our love out into the community and the world.

And when you see the many colors of the window, remember that God created rainbows to remind us of God’s covenant with us. And remember that Jesus Christ is God’s new covenant and promise to us.

As the light shines through, and we see the air bubbles in the glass – we are reminded that God does not expect us to be perfect. God wants us to know that we are an integral part of the overall design. God wants us to let God’s light shines through us, accepting us just as we are – air bubbles and all. Even if we are not perfect, we are each beautiful as seen through the eyes of God and we are all loved.